Diospyros virginiana, the Eastern Persimmon, has a large part of my childhood tangled up in it's corky, fruit-laden, branches.

Persimmons are late-ripening. It's mid-October here and the majority of the fruit is still unripe. Only a few are sweet enough to tempt, and the high amount of tannin still present makes them very drying to the mouth. But oh, they are sweet - so delicious and sweet! They would make an excellent marmalade, or fruit addition to breads/cookies.


One of the stories my grandparents used to tell was of how you could split the pits open (like a split pea) to foretell the winter's weather. A general consensus was taken of the seeds from that single fruit, who's "germ" takes on the shape of cutlery.

Apparently it's GON' RAIN. Also, I have the dorkiest paper towels ever.
A spoon meant a wet winter, or heavy snow. A knife meant a bitter, cold winter. A fork meant one that was mild, or dry.

Persimmons are shaped rather like a pomegranate, and pair well with them. Their fruit is best eaten after all others would've been considered spat upon by the phouka. Here, they're not good for eating until they begin falling off of the tree in November. They are a fruit of winter, wrapped in autumnal shades, and hanging on the tree after the leaves have fallen.

They are fruit of the underworld in this regard, no less special than pomegranate, and sometimes sweeter still. 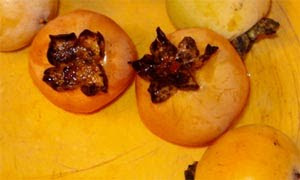