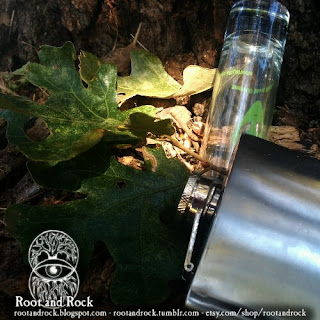 NOTE: This entry is  not even slightly historical, and my own research/intuition. I'm one of the only people I know of that keeps this plant around, and the only one I know of who uses it in woo (thus far).  So, please attribute accordingly, and try not to be a bad neighbor. This post is also an ooooooold draft, which I am now posting to ensure this blog doesn't go dormant again.

Sometimes a plant catches my eye. Usually while I'm driving somewhere, or taking a walk. I've known for years that the berries of this tree were used as a soap substitute by the Mormon wagon trains, but never really knew anything else. Curiosity finally won out.

It's not a big tree, but they are lovely. The bark is thick and craggy, the berries look like little burning suns when the light hits them. But what use could they have (aside from the obvious) for this witch? How do I dig deeper and discover the uses of this plant?

This entry has been languishing in my "Drafts" for a long time now. A long, long, time. Re-reading this entry in repeated attempts to finish it I broke down crying quite often. I would shelve it for a few weeks, then a few months, and now... ah... it's been a while. Because it involves stories of spirits who deeply impacted me, and who set the tone for the way I deal with the Animal Dead as well as the Human Dead.

This is also about animals in general, and expands on HTTAS: Permissions - About the need for a working relationship and consent when engaging with others in that relationship.

This post is a letter of love and fondness to Wrathful (especially), and to all of the spirits I have known. It has been my privilege to serve as their psychopomp and friend.

This is not a how-to post, this is another example of why I tell people that my blog is a travelogue and journal rather than an instructional guide.