The Witch's Familiar by Raven Grimassi 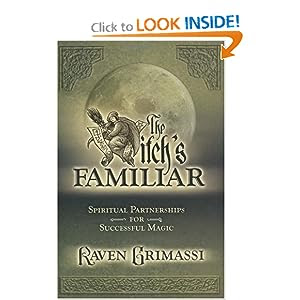 What I like:
This work is worded quite accessibly, without being needlessly weedly or pandering on the more complex aspects of what it discusses. It is frank in it's discussion of the use of bodily fluids (both sanguine and amorous), and it's depiction of the nude human form in the Chakral/Energy center imagery. The book takes a practical approach to familiars, and draws upon witch trial records, which (IMO) is in the books favor, even citing some of the dangers associated with them in the Old World.

There are a series of seals/emblems/sigils provided, which are straitforward and very easy to freehand or photocopy for use. The work, like any other book, is a foundation to grow on, and includes information as diverse as growing plant familiars, the dismissal of uncooperative beings, and the creation of fetishes and housing for nonphysical familiars.

What I did not like:
It does run afoul of good sense by falling into the trap of starting with the assumption that all summoned entities are what they seem, and that a sigil created by a newbie will be able to turn aside an entity already lying to them.

There's also an element of hubris in the terminology of "using", "utilizing", etc. That I find rankles my sensibilities as I read it, but that's likely my "ANIMALS ARE (tasty) PEEPLE TOO!" gland acting up. I dislike the recurring "tripple spirals" on the seals, simply because I feel that each one could've benefited from another "trippled" image (such as blood, drops, arrows, etc.) that were more in tune with the seal's purpose. They also do not discuss the method they used for arriving at the sigils, which is important to someone like myself.

The constant reference to "power crystals" also put me off. Also, the author mentions the use of the Witch's Wheel (Magician's Wheel) multiple times for the creation of seals/sigils of the Familiar's name, but does not provide it in the book. For anyone that doesn't keep several copies of the Wheel around, this could prove problematic.

All in all, I give it

- My gripes are mostly knitpicking, and for those unfamiliar with familiars, it would be far more helpful than a salty old ass like myself.
at 7:15 PM