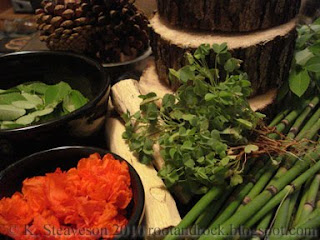 The moon is waxing, and it's not quite so terribly hot that I can't -breathe-, so it's time again to do wildcrafting of herbs, curious, and whatever else I come across that sparks my interest. That whole solstice bit is icing on the cake, as far as I'm concerned.
The "haul" consisted mostly of leaves for pressing (I press, paint and frame them to make unique artwork). I got two remarkably large oak leaves (nearly 11" long), a couple Catalpa, some American Sycamore, elm and small oak. A huge portion of Horsetail reed, Black-Eyed Susans, some pomegranate blooms/leaves/stems, Coreopsis (dye flowers) and a nice portion of Wood Sorrel. I also came across a couple of lovely little land-snail shells, which are destined for beads. Some of this will be available for sale or trade, soon.

The shocker for a friend of mine (who was busily talking in my ear while I gathered stuff) were the Black Eyed Susans. They are, and I am not joking when I say this, one of the best herbs for untangling and diffusing domestic abuse. The best method, of course, is a .45 to the side of the abuser's head (though a bit overkill, I will admit), but for those of us on the outside who want to establish a more gentle method of control - Black Eyed Susans.
These bright flowers resemble the sun mid-eclipse. Representing that moment when we lose sight of all light, at the darkest possible moment, just before the sun returns. Employing them in either gentle spellwork designed to ease strife, or malicious work designed to insert honey-locust thorns covered in platypus venom into the urethra of an abuser helps to tie one's efforts into the situation at hand. They also help the person suffering the abuse to keep their chin up, which can be invaluable.

The pomegranate bits are going to be incorporated into an incense for underworld journeying work, which will be a trial/experimental run before I consider making more for wider consumption. 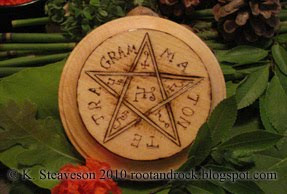 I also went on a bit of a 'spree', re-photographing old artwork (and new) for deviantart. I've been making small woodcraft items, pyrographing mostly, and they're turning out nice enough to be proud of. The "new" camera is also doing justice to some of my older works, so I've been replacing old images/uploads with new. And yes, that kind of stuff will be available by commission, or eventually posted up online.

Since it's the Solstice, I took note of what plants were particularly available right now for a future "Midsummer" incense. It will likely balance dark, earthy scents with light, airy ones... because with incense it's hard not to be very literal.
at 10:46 PM