The Three Questions - Consumption and Adaptation in Craftwork. 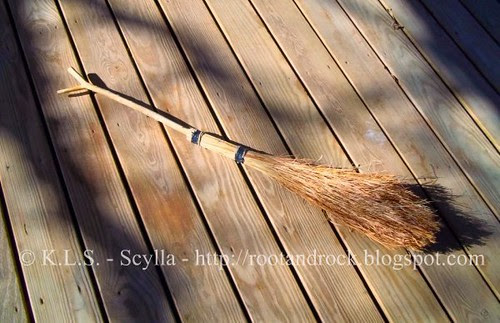 This was going to be a post about how I made myself a ritual broom. It was all tidy and had it's ducks in a row. It was clean, and instructional, and got to the point early on. And then it exploded. Well, it didn't explode but the point changed - it went from a post about how I made a Really Traditional Broom that's Not Even Remotely Traditional directly to an examination of the process of "consumption" in the New Age, Witchcraft and Neo/Pagan communities.

Do I Need (Insert Thing Here)?

I do not live in England - I've never even been. If I did visit they'd have to drug and hogtie me to get me back on the plane. Because England is a land of Curry, Clove Cigarettes and Good Beer... It's the promised land. It's also the land where 90% of Witching Herbs And Woods grow naturally, free for the plucking, along every roadside and hedgerow. It's the land where there aren't poisonous things to nip my ass cheeks when I'm drunk, skyclad, and fall down go boom.

My land is pretty damned rural, but I don't have Hawthorn and Yew trees banging around to spare. I don't have Birch and Ash in my witching woods - but I do have a lot of "tallgrass" growing in the less maintained areas. I don't "know" Yew, or Blackthorn or English Oak. I know Red Cedar, Chickasaw Plum and Post Oak. But, at least, the English native plants have a place in my craft, if not a deeply entrenched one.  They are not especially scarce in England, and they're not especially problematic to grow on my own land. I can import, and adopt.

The same cannot be said for a lot of herbs and resins often cited as one of the XYZ Number you Absolutely Must Have in your Witchy Cupboard. White Sage is on the decline in the wild, a U.S. native that was once plentiful is becoming scarce and hard to find due to over-harvest for the "Smudge" market - Sweetgrass is right with it, too. Frankincense, Sandalwood, Aloeswood, and even Dragon's Blood are under serious pressures and becoming more scarce.

Last year I watched Balm of Gilead at least double in price, and I've found local trees getting stripped by people selling it for the "prepper" market (they helpfully inform me, before telling me I not to bother going further back off of the trails - they've already picked there). Whole stands of cottonwood are bare to the height accessible by someone standing on the cab of a truck.


An Argument With/About White Sage,
and The Three Questions Everyone Ought to Ask Them-self.
So, I thought I needed White Sage.  White Sage has a particular vibe, it does the job pretty damn well, and it's incredibly easy to find. But then, there's the whole problem of it being driven extinct in the wild. There's the problem of cultural appropriation that rears it's head, even when it's not being used to "smudge".


Do I need (Insert Thing Here)?
I am a practitioner of largely English-flavored Witchcraft. Where it fits I have adapted my practices to work in an American context. The distances involved are greater, the wilderness is different, the nature of the beast is entirely disparate. Do I, Me, Scylla, need this thing? Am I treading into a cultural area where I don't exactly fit, and am probably unwelcome? Am I depriving someone else who IS welcome in that territory the opportunity due to financial and social privilege?


Do I need (Insert Thing Here)?
I am on a budget. I am within a certain boundary. I have a great number of things at my disposal to utilize. Do I need it, or do I just want the thing? It's okay to just want something, but I also have to evaluate that want in concert with the above. If I don't need it, what do I need?


Do I need (Insert Thing Here)?
Can I find an analogue that'll do the job, regardless of the above statements? Can I use Rosemary or just throw some Wormwood and Sulphur at it? Do I need this, specific, thing... or is there just a far better option I've yet to consider because that one is right in front of me?  If I've passed the other tests and find myself here, then I also have to ask if I Need It... can I grow it or make it myself?

Yeah, I needed White Sage... So I bloody well bought I packet of White Sage seeds from Alchemy Works. Unfortunately, White Sage grows badly for me. It germinated, but it never thrived. No one can seem to keep their hands off of that particular seedling, and it's declining quickly. So even if I answered those questions to my own satisfaction, maybe I just ought to throw some goddamned rosemary at it - or buy some culinary sage. So that's what I did and the culinary sage has already yielded an ounce of dried leaves.

The best way to find a substitute for a problematic article (be it due to rarity, due to price, or due to Just Not Having Any And I Need It Done Now) is to create a simple list of what the thing does, what "flavor" it has, and to fill the flavor profile with something else.

In the case of "White Sage" we're looking at an orientation to Jupiter, an "airy" quality, a bang-up job of getting rid of Bad Things, purifying, cleansing, and "associated with bees".

So, it would stand to reason that we want to look for these qualities in our substitute. A Jupiter influence isn't essential, unless you're working specifically with the planet. What is needed is "Airy", "Banshing", "Cleansing", and "Purifying" - Rosemary.  Let's say it's 2am. Fine, let's haul ass to the Sack-n-Suds, by a little McCormic Rosemary jar. Problem solved.

I wanted to make my own. I was prepared to order supplies online before I sort of stopped and considered that I didn't really need to. I asked myself the questions.  I really, really, didn't need (or even want) the things I was about to order, and so I went for a walk. I gathered, from my land, the things that represented what I was looking for. I asked myself the three questions, and was satisfied with the answers I found. So, it's really not even about the broom, but about making sure I'm using my noodle.
at 4:58 PM