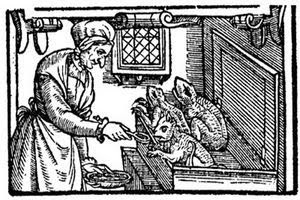 On a forum, another Hedge-crafter took exception to some of my comments about Familiars, and I can certainly understand why they might. It made me realize that I might have been somewhat unclear in some of my thoughts. What I said was a direct reflection of my own experiences, and of the research I've done. Though, I suppose I ought to have been more clear in the first place (sad is the day when a forum of Hedgewitches have to resort to mincing words).

In the trial of the Pendle Witches, Alizon was compelled to accept a familiar by Old Demdike while the pair were walking home. The process of the Familiar feeding on her left a mark which lasted six months afterward. In all of my experiences concerning beings feeding upon a person, if it leaves a mark that lasts such a long time - well... that's not exactly a "deep, loving, relationship". It hurt, it was probably frightening, and at that moment it was more parasite than life-partner.

Some Witches did, and do, doubtlessly deal with gentler beings, while some will have other kinds of work, for which neither gentle beings nor gentle partnerships are appropriate. Their interactions will be different. No two witches are alike, nor should they be, and as such their perspectives will be different. No one should expect (or demand, as some do) otherwise.

As was one point of contention - at best, one can expect to have a symbiotic relationship, a mutually beneficial, and even loving one. At worst, one may find that they are the prey, and foodsource, of a much stronger and less gentle being than they had assumed (or been lead to believe by white-washed source material). To me, this is no more controversial than saying "At best you can expect to have an awesome day, at worst you can expect to die". Both statements are unflinchingly honest, however uncomfortable they may be to hear.

The second point of contention was the Familiar leaving the Witch. Well... when/if there is nothing for them to gain anymore, they will leave... the same as any being. I have also stated that in my experience, sometimes they can get annoyed enough to simply leave.


A Tale of The Blackedogge.
Alizon Device met with a pedler on the highway, and demanded that the peddler sell her some pins. He refused, and Alizon, leaving the scene of the altercation, met again the black dog who had suckled at her, leaving a mark which lasted six months. The Dog said "What wouldst thou have me do unto yonder man?" Alizon asked "What canst thou do to him?"
The dog answered "Lame him". The man didn't make it more than 200 feet down the road before he fell down, lame.
Five days later, the Black Dog appeared to her again, compelling her to stay and speak with it. She refused, and did not see the Black Dog again.

Alizon Device, amongst a long line of witches real and accused, would likely laugh very hard at the idea that familiars are relegated to ONLY being gentle, loving, beings.
at 3:39 PM