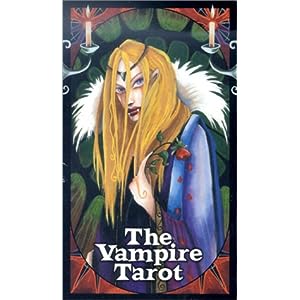 Statistics.
What: The Vampire Tarot Deck w/Mini Book.
Who: Written and Illustrated by Nathalie Hertz.
Price: Retails between $5 (sale prices) and $20.
Size: Deck is slimmer, 2.5x5", round-cornered, and "Plasticoat" glossy.
Where: I purchased my deck at Borders, here is an Amazon.com link.
Rating: ●●●○○

Upsides: The deck is packaged in an attractive, semi-durable tuckbox with a small mini-book (stapled, not a folded sheet). The book is 35 pages, which is large for a deck-book. It is black and white. The layout is clean and simple, easily readable. The cards are nicely-sized for smallish hands and durable, which is nice, and the plasti-coat finish is slightly textured which helps with dealing and shuffling.

Downsides: Tuck boxes are not meant for the long-haul and I assume this one will go the way of others in time... that is to say floppy, falling apart, missing the tuck-tabs...etc. The book is small, concise, and to the point. Almost too short, seeing as it's a deck-book. There are no frills and the spreads are minimal and standard. I really would like to see tarot authors create spreads specifically for certain decks.

Style: This is a standard "tarot deck" in the Waite/Smith Style. The back image is a simple tribal-gothic swirl of black on red with a border.  Faces are a watercolor style, lineless, painted look with thin borders of black, on which the title and numerals are printed, lined with a thin blood red border directly around the art. The art itself is bordered on two sides with a gothic vine-and-leaf motif on gray, in a "Tombstone" style.
The Majors have a style that is gothic-tribal, with fairytale-like clothing and hairstyles. The "quality" of the art itself is a little lacking in anatomy and perspective, but it fits with the over-all impression of the deck and does not exactly detract from it. The suits are Cups (filled with blood), Swords (held by funerary monuments and statues), Pentacles (depicted as shields, discs, coins and flowers) and Wands (depicted as metal-tipped stakes). Minors are pipped on the number cards, with additions ranging from tiny portraits to pictoral scenes alongside them. Trumps (there are four for each suit) are bestial royalty holding the suit's token.

Tricks and Treats: Like all vampire-associated decks they are trickier to read. Some card meanings are reversed or augmented by the deck and readings can get especially nuanced when it comes to "Strength" in a Vampire tarot.

Verdict: The deck reads pleasantly, it's got a bit of the "Thoth" flair for the dramatic, throwing out whizz-bang cards on blase topics to keep the querent interested. It's very, very, very "Goth" - and that can be a hurdle for some people.

Statistics.
What: The Vampire Tarot Book & Deck Boxed Set.
Who: Book and Deck by Robert M. Place.
Price: Retails between $5 (sale prices) and $30.
Size: Deck is roughly 3x5", square cornered and glossy.
Where: I purchased my deck at Hastings, here is an Amazon.com link.
Rating: ●●○○○